I suppose I should warn everyone that this post is going to be far geekier than normal. :-)

For the past several months, I’d been running the release candidate of Windows 7. I already had access to a legal copy of Windows 7 Professional, but I had put off upgrading for two reasons. The first reason was that the release candidate was working well for me. The second reason was that my main PC was getting a bit long in the tooth. I had been getting errors about the chipset fan for a while, and besides which, the system was about four years old. I was wanting to run upcoming games like StarCraft II and Diablo III, and also games I already had like Left 4 Dead and Team Fortress 2 were having issues under 7. I had wavered between buying a new PC, upgrading the existing one, or getting a Mac. With my deadline being this past Monday, I finally decided to upgrade the existing machine. 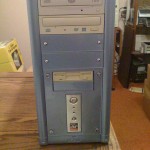 After studying the machine and deciding what I needed (and getting advice from my friend Sinc), I decided to go ahead and replace the motherboard, CPU, RAM, and case. I would be able to salvage the hard drives, DVD drives, and power supply from the old machine. I suppose I could have salvaged the case as well, but I had never been very happy with it. It was an aluminum case, and was extremely flimsy. A good example of it was in the front-panel USB ports; one of the ports actually ended up breaking, thus becoming unusable to me. The wires going to the motherboard for the audio didn’t work properly, either. In short, it was time for a change.

I ended up purchasing an AMD Athlon X2 245 CPU, an Asus M4A78-EM motherboard, and 2 GB of DDR2 800 memory from Newegg. I would have bought a video card, but the motherboard came with onboard video, which will do fine for another month or two when I’ll go ahead and get one. However, after I checked the specifications of the motherboard, I realized I’d have to retire the main PC’s name.

This may surprise a number of people, but I didn’t get my first “modern” PC until my 21st birthday. That machine was an IBM Aptiva 486/66 with 8 MB of RAM. When I got it, I had given it the designation Tiamat (after the Fiend of Air from Final Fantasy). Ever since then, my main PC always had the name Tiamat, as I would constantly use components from previous machines in the newer machines. Every machine since then has had at least one component from the original Tiamat. Well, the one final component from the original in the new Tiamat was the floppy drive. For those wondering why I would keep the floppy drive even in 2005, the answer is that I needed to load drivers for the SATA RAID controller from floppy for Windows XP setup to recognize them. Well, this new motherboard did not support a floppy drive, so that last component was no longer needed. I’d have to come up with a new name.

In any event, I spent Sunday afternoon doing a final backup of local files to my iPod Classic, and then finally shut Tiamat down that evening (with a bit of a wistful feeling, I might add). As soon as I got home Monday evening, I began the process of taking Tiamat apart and removing the hard drives, optical drives, and power supply. I had gotten a new case from Micro Center , and while it had cost less than the flimsy original case had, it was definitely of better quality. I installed the power supply into the case, followed by the motherboard, CPU, and RAM. As I installed the drives, it occurred to me that the install was going very smoothly. In my experience, that usually meant that there’d be a serious problem as soon as the system was powered on and booted for the first time. I also couldn’t help notice that while my case was black, the optical drives were beige. I didn’t have replacement bezels for them, so they’ll just have to stand out. Once everything was connected to the motherboard, I took the open system to my room, where I connected a keyboard, a power cable, and the monitor to it for testing.

To my surprise, it booted right up without a problem. I ended up taking it back into the office and putting all the case components back on, and then took it back to my desk and hooked everything up to it. Once everything was in place, I powered it up, and began setting the machine up. As before, I decided to run the two SATA hard drives in RAID 0, as it would provide increased data throughput. RAID 0 isn’t fault-tolerant, but then anything vital other than A/V media was sitting on my server. Once that was taken care of, I popped my Windows 7 Professional CD in the DVD drive and started the installation. As that was ticking over, I saw the blue glow coming from the fans inside the machine, and decided that the name I had been thinking of for it was appropriate. My machines are typically named after female video game characters, and I had wanted something Microsoft-specific (as I had gone with it over a Mac)… plus the blue glow evoked a holographic/high tech look. So, I decided to name the machine Cortana.

Remember how I had said I had expected something to go wrong? Well, it happened during the OS install. The installer for Windows 7 refused to recognize my product key. Now, I KNEW it was legitimate, as it was purchased from Office Depot. I ended up calling Microsoft support and had them walk through fixing the issue with me. Once that was taken care of, the reinstall went fine and the system came up without an issue. Restoring my Firefox and Thunderbird profiles went smoothly, and copying my media back to the PC went off without a hitch. About the only problem I had was that my iTunes library database didn’t copy over correctly, but I had a backup of my most used playlist stored anyway.

I also have to admit, I picked a new wallpaper for the system based on its new name. ;-)

All in all, everything seems to be working properly on the new system, and it’s definitely running faster than it did before. Most of my old apps are installed, and all needed data has been restored. In the meantime, Mom has asked if I could use the old components to build her a new machine, but considering the problems I had with it before, I’m not entirely sure that’s a good idea. I might just end up buying a separate desktop system for her.

For now, though, I’m just going to enjoy my newer and faster system. :-)

One thought on “A PC upgrade, and an old name retired…”