It’s no secret that Jennifer and I watch The Daily Show with Jon Stewart on a regular basis. He may be a comedian, but he tends to have some of the most insightful commentary on current news items. That said, we found his piece on Florida’s governor Rick Scott yesterday to be both hilarious and insightful. I’ll post the embed here so you can get caught up on the gist of what was said.

By sheer coincidence, one of my friends on Facebook shared the following photo this morning: 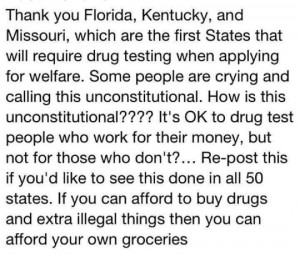 Of course, my first reaction was to think of what Jon Stewart said in the above clip. My friend Joseph also made the observation that it doesn’t help anyone, simply because there are not any alternatives for people who fail the drug testing other than losing public assistance, at which point they turn to crime to get their fix.

However, the problem with the system is a lot more fundamental. As reported in the news recently, only 2-3% of welfare applicants in Florida failed drug screenings, and less than half of those canceled their drug screening. Worse, as the state was required to reimburse applicants for the cost of the screening, the state actually ended up spending $46,000 more than it would have if it had simply given the people who failed the drug screening the welfare money in the first place. In other words, the state ended up spending more money on a program that did not have a significant effect.

In fact, the only winner in this situation is Rick Scott, who can claim to be tough on “welfare fraud”, even though this program has been proven ineffective. Supporters of the bill claim that it was never about saving money, but was to keep welfare from being used for drugs. Even if that is the case, isn’t a tenet of Tea Party dogma (Scott ran under a Tea Party platform) an abhorrence for wasteful government spending? Would this not be a perfect example of wasteful spending, if it’s doing nothing yet costs thousands of dollars?

Interestingly enough, Scott cofounded a company called Solantic, who does drug testing among other services it provides. While there is no link that I’ve found linking Solantic to the welfare drug testing, it is linked to drug testing state employees. According to reports, Rick Scott is legally in the clear because he moved his financial stake in the company to a trust his wife oversees, but I would argue that it does not ethically put him in the clear. That is mostly a point for another discussion, but it does strike me as more than a little coincidental that Scott is gung-ho for this policy when he has a financial stake in a drug testing firm.

In any event, the fact is that this policy ended up being a colossal failure when implemented in Florida. Moreover, a Federal court has granted a temporary injunction against the law while waiting for it to go to trial. The judge in that case even made the point that she would likely find it unconstitutional. My advice to those thinking of posting this meme to your Facebook walls is this: take a look at its effectiveness so far, take a look at our courts are looking at it, and ask yourself if it’s really worth the time and effort on something that appears to be an ineffective waste.