It should be no secret that I love classic arcades. Not only does it bring back a nostalgia factor for me, I genuinely enjoy spending the time to play the games.

Admittedly, my favorite classic arcade isn’t even in Houston. That honor has to go to Pinballz Arcade in Austin. Consisting of two floors of both classic and modern arcade and pinball machines, it’s easy to spend several hours in there just going from game to game, having a blast. In fact, the last time I was there, I ended up spending most of my time playing Super Street Fighter IV Arcade Edition and Street Fighter X Tekken against Jenn Dolari. Of course, I don’t go there as often as I’d like for the simple already-stated reason: it’s not in Houston. As I go to Austin once every year or so, that’s about all I get to do there.

There are options in Houston, however. The most popular one is a place downtown called Joystix. Most of the time, it’s a distributor of video and pinball arcade machines, from as old as Pong to as new as Terminator Salvation. Twice a month (on the first and last Friday), they open their showroom from 9 PM to 2 AM for a $15 cover fee, and every single game is available to play. In addition, drinks are available at the lounge connected to Joystix through a door.

Unfortunately, though I’ve been to Joystix several times, I don’t really enjoy going there anymore. There are two major problems I have there. The first problem is that even though the place sells the machines that are on the showroom floor, they’re not always of good quality. I’ve come across machines with unresponsive controls, damaged screens, or were plain not operational. The second problem is just how popular the place is. Within a half-hour or so of the showroom’s opening, there are so many people that you’re almost shoulder-to-shoulder at the machines and people are pushing against you to walk down the aisles. It gets even worse in the lounge, where it becomes a solid mass of people. Jennifer ends up not enjoying it because she feels crammed in when sitting in a corner reading her book or checking her phone, and it gets so loud and so crowded I come close to a meltdown. 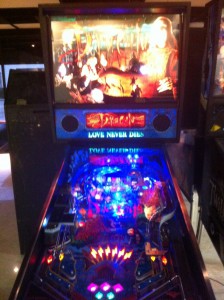 Several months ago, my friend Josh told me of another arcade that had opened around 59 North and Beltway 8 called the Game Preserve. I ended up going there with Jennifer, and ended up having a good time. It has fewer machines than Joystix does, but they tend to be in a better state of repair. When a machine DOES malfunction, it’s generally repaired quickly. Since my last visit there, they moved to a newer facility where instead of being in a converted small warehouse space, they’re in a pure office space with working air conditioning throughout the facility.

The only two problems I can think of with the Game Preserve are that it’s pretty far from my house and that they don’t tend to have newer machines. The only really new machine they have from the past five to ten years is a single Tron: Legacy pinball machine set to one side, though that’s understandable considering the place is owned by a collective of collectors. That’s not to say they don’t get additional games every so often; they recently added the pinball machines Bram Stoker’s Dracula (one of my favorites) and Twilight Zone to the game floor. As for the distance, it’s around 45 miles from my house, which means I really am only able to go when I’m on that side of town, which is not very often anymore.

I’ve personally found the staff at the Game Preserve to be very friendly and helpful as well. My friend Louie wanted to go to an arcade for his bachelor party earlier this month, and had originally thought of Joystix. Instead of spending $600-700 or so for a couple of hours to have Joystix by ourselves (Louie doesn’t like it crowded either), we went to the Game Preserve where it was nowhere near as crowded and spent far less. In fact, we were prepared to spend $60 total to get in ($15 per person), but the staff informed us that if I paid $30 for a bronze membership for the month, the rest of us could get in free. Not only did we do that, I went back this past Sunday with Jennifer and spent a few more hours playing. :-)

If there was a classic arcade like the Game Preserve closer to my home, I would be a very happy camper. Still, I enjoy the chances I do get to visit the Game Preserve and Pinballz Arcade, and I’m glad that there actually are decent arcades out there, allowing me to live a little bit of nostalgia and play the classic games the way they were meant to be played. ;-)