Normally I don’t post concerning automotive news, but this seemed too interesting to pass up. 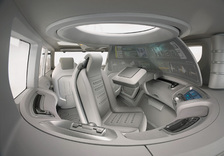 Nissan of Europe has released a bevy of images showing every nook and cranny of its upcoming Geneva-bound concept, the Terranaut. The 4×4, according to the company, was designed for â€œscientists, geologists, archaeologists or adventurersâ€ whose office is the great outdoors.

It seats three people in an interior quite obviously modeled after a U.S.S. Enterprise shuttlecraft. The â€œspherical laboratoryâ€ is accessed from a seat that swivels 360 degrees to give any intrepid scientist access to all of the vehicleâ€™s workstations. Those workstations leave room for only one passenger-side door, while the driverâ€™s side has two swing-out doors with no b-pillar. Whatâ€™s the chance of seeing the Terranaut on the street? Pretty good if you own a Holladeck.