Some time ago, I had written about using IM applications on my iPhone. I tend to do quite a bit of IMing when out on the road; unlike the AT&T Tilt I previously used, the iPhone didn’t come with an IM program of its own. Over time, I installed the official AIM and Yahoo apps, and they worked fine for what I did (the Yahoo one much better than the AIM one). While there were multi-protocol clients out for the iPhone, I was a bit leery about trying most of them. I had heard Trillian had been planning on releasing an iPhone app for a while, so I decided to wait and see what that one would be like. Well, a few days back, my friend Patrick McCarron informed me it had been released, so I went ahead and picked it up.

I have to say, I was rather impressed right off the bat. 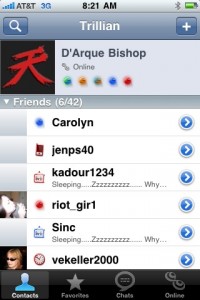 If you have a Trillian Astra account, it automatically populates your mobile Trillian with the saved IM accounts and asks which ones to load on launch. From there, it signs the user in, and IM works right away. Typing in messages is easy and auto-caps and spell-check works fine. One might not think that would be such a big deal on iPhone, but the AIM app never really supported auto-caps. Push notifications come through fine as well. I actually spent from Friday evening to Saturday evening signed into Trillian on iPhone (as I was away from a PC most of that time), and it worked pretty much flawlessly.

Now, there are disadvantages. Apparently Facebook and Twitter support isn’t in place, which is really fine by me because I prefer using the official Facebook app and Twitterrific for those. There isn’t Skype support either, but then again the Windows Trillian app only acts as a frontend for an existing Skype install. Landscape keyboard support isn’t available, which may be a deal breaker for some; for me, it doesn’t really matter as I rarely use landscape keyboard. The final quibble I’ve heard some complain about is the fact that push notifications are only available for 24 hours between program sign-ons. Again, this doesn’t concern me much as I change my status and availability more often than that, especially if I’m going to bed and don’t want to be woken by incoming messages. :-)

All in all, though, Trillian for iPhone is a rather solid app. I’ve gone ahead and deleted the AIM app for iPhone (which I still consider junk), but I’m keeping the Yahoo app for those times where I just want to sign in to Yahoo to talk to Jennifer while on lunch or something. For $5, it’s hardly the most expensive app out there, and so far has worked out pretty nicely for me. I’ll likely be giving it even more use while in New Orleans later this week as well. If anything changes there, I’ll post about it later. For now, though, it’s a welcome addition to my iPhone app library.