It’s no surprise to anyone that I’m a geek. The funny thing is, it’s only really been recently that I’ve been wearing geeky shirts. Granted, there were a couple of exceptions; I’ve owned an “ALL YOUR BASE” tshirt for a number of years, and I have a couple of Transformers-related club shirts. It’s just that since dating Jennifer, I’ve been picking up more and more geeky shirts.

I think the first ones had to be the shirts she got me for my birthday.

First off, she had gotten me a black polo shirt with the Decepticon logo on the left breast. In addition, she got me two black tshirts we had seen at a convention. One said, “I have NOT lost my mind. It’s backed up on the server. And the network is down again…” The other has a warning logo that shows… well, the caption (translated from German) says it all: “Please do not impale coworkers with forklift forks.” It’s a reference to a short film called Staplerfahrer Klaus. I also picked up a cheap green tshirt with a 1up Mushroom that said “GET A LIFE”. I’d gotten some amusing feedback from those shirts… mainly from people wondering what the hell the forklift shirt meant.

Since then, Jennifer has either gotten me other shirts or encouraged me to get them. 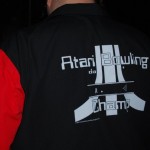 One she’s gotten me, for example, has a picture of the TARDIS on it with the caption, “Trust me, I’m a Doctor.” Another is one that, well… we were looking at bowling shirts online as a bit of a lark, and she found one that said “Atari Bowling Champion”. I went ahead and bought it, and its premiere came at an arcade event she and I went to with our friend Julie. It was the hit of the night; several people took pictures of it. In fact, the image of it to the left came from someone’s Facebook album of the evening. The second time we went to the arcade event, I was stopped by a guy telling me how awesome he thought my shirt was and asking where he could get one. I ended up giving him the website I got it from and wishing him luck.

As for what prompted this post, well… it’s kind of funny. On Friday, I was talking to some of the girls in HR, and the VP of HR/quality stepped in and made a comment about how I always seem to have the coolest “poker” (club) shirts. The one I was wearing that day had the Decepticons from Transformers: Armada on the front, and the Decepticon logo stitched onto the left sleeve. Then, yesterday, Jennifer and I were at Walgreens; we asked a clerk for help, and as we talked she told us she would only help us if she could have my shirt. I was wearing a black tshirt that said, “Real vampires don’t sparkle.” I admit, I’ve worn it before to annoy a friend who likes Twilight. However, I don’t really mind if anyone gets offended by it, simply because Jennifer gave me the shirt as a gift… and she’s a huge Twilight fan. :-)

Ah, well. I’m embracing my inner geekiness and sharing it with the world. I’m just amused that people actually like the shirts and appreciate them.