I had never actually been one for decorating my work area. For the longest time, the only decoration I had in my cubicle was a Pessimism desktopper from Despair, Inc. Some months back, though, I was trying to decide what to do with a couple of items Jennifer got for me. One was a small Transformers Megatron figure, and the other was a Pez dispenser shaped like the Riddler. Then, after buying a diecast Recognizer from Tron: Legacy, it suddenly occurred to me what to do with them.

I started putting them on my cubicle wall. As for how it looks now… 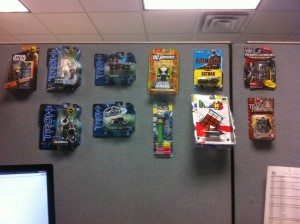 The figures are usually the first thing someone notices when they come to my cubicle. At least one person has since commented that it helps make my cube look like a “geek paradise” or something similar. Jennifer doesn’t understand why I don’t remove them from the packaging; I really don’t have a good reason myself, other than it’s easier to keep them on the wall and also makes it easier to keep everything together.

Also, it’s amusing that some of the figures are actually gifts. One of my coworkers bought me the Yoda figure after lamenting the fact that I didn’t have any Star Wars figures up. Jennifer bought me the diecast Batmobile when we went to an arcade expo back in October. The Rubik’s Cube was a prize for getting the high score in Ms. Pac-Man at one of my friend Eric’s game nights.

I definitely intend on expanding the collection, but I’m a bit choosy as to what to put up there. I’m waiting until Transformers: Dark of the Moon toys start becoming widely available before expanding the Transformers section, for example, as I want to put a Shockwave figure up there. In addition, I’d like to put a Mortal Kombat figure or two up, provided they’re not too expensive and the plans for new action figures actually do go ahead. Otherwise, I’m not sure what else I’d put up there.