As one might imagine, my bookshelves tend to be a bit eclectic. 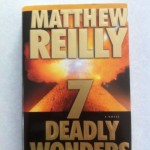 Admittedly, most of the books I own fall under the categories of science fiction, fantasy, or horror. Still, almost everything in the bookshelves is of value to me, if only sentimental (gifts from friends, for example). However, there does tend to be the odd book or two that is just weird for me. While looking for a book to read the other day out of the ones I haven’t, I chanced upon one book that I’d been meaning to read. It’s still an odd duck for me, and I figured I would share its history.

The book is called 7 Deadly Wonders, and it’s written by an Australian named Matthew Reilly. The title is the US-only title; the original title is Seven Ancient Wonders. I guess it’s another of those examples of marketers pandering to the American Idiot, who would also wonder what the hell a “philosopher’s stone” is. In any event, the book itself is rather innocuous; it details the story of several groups of people trying to harness the incredible power of an ancient artifact sealed away by Alexander the Great. Pretty pulp-sounding stuff, really, but not something I would normally pick up in the bookstore.

I got it at a Midway Games media event.

It was actually at the 2006 Midway Winter Gamers’ Day event. Despite the name, Gamers’ Day was for the gaming news media; gaming news sites would be invited to see announcements about upcoming Midway game releases. I was there on behalf of Mortal Kombat Online, as Midway was announcing Mortal Kombat: Armageddon at the event. The event started with numerous presentations. Once the presentations were over, we were essentially free to do whatever we wanted, but the main draw was that several of the announced games were playable in some form or fashion on the event floor. One of the playable games was a game called Rise and Fall: Civilizations at War. In a sense, the game was your bog-standard PC RTS along the lines of Age of Empires. Essentially, you control one of several ancient armies, and attempt to defeat your enemies. The catch that was supposed to make Rise and Fall stand out was that during the battles, you could take direct control of your army’s “general” (Alexander the Great, Cleopatra, Julius Caesar, etc.), at which point the game switched to a third-person action game.

In any event, when I approached where the PCs playing Rise and Fall were set up, I noticed something curious. 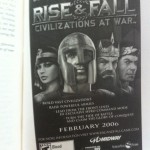 There was a large stack of hardcover books, free for anyone to pick up. So, I wandered over, and picked one up; the book was one I had never heard of called 7 Deadly Wonders. I read the description on the inner flap, but was still a bit confused as to why they would be given away at a Midway event. It was then that I saw a sign saying that it was a promotion for Rise and Fall. I flipped to the back of the book, and saw an ad for the game there. I shrugged, and placed the book in my laptop bag. It struck me as being a rather odd bit of cross-promotion, as there really was no link between the book and the game other than the fact that both books involved Alexander the Great. They didn’t even take place in anywhere close to the same time periods, either, as Seven Ancient Wonders takes place in modern times.

Ah, well. It certainly wasn’t the only time Midway did some cross-promotion. It was simply one of the stranger ones. I actually never saw any more of the book/game promotion outside of that event, so I don’t know if the copy of the book that made it to US shelves contained the ad. I know I didn’t see anything in any bookstores about it. As for the game itself, it was released to little fanfare and disappeared quietly. According to Wikipedia, it was eventually re-released as a free ad-supported version sponsored by the US Air Force. I didn’t hear anything about that at the time of re-release, either.

The book still sits on my bookshelf to this day. Perhaps I’ll finally get around to reading it soon. :-)