I happened to mention in the previous entry that sometimes Midway Games sometimes happened to have odd promotional items to go with their games. While I worked closely with some people from the public relations department at the time and have nothing to say but good things about them, I sometimes privately questioned some of the decisions of the marketing department. However, the only time I encountered a real “WTF” is after one Gamers’ Day event, when I received a “thank you” item that had to be expensive.

In early 2007, I had attended the Midway Gamers’ Day event in Las Vegas. For this event, I was covering the announcement that Mortal Kombat: Armageddon would be coming to the Nintendo Wii. The event was a more or less quiet one for me, as all I needed to do was tape a presentation and then interview Ed Boon and Shaun Himmerick. In any event, it was a pretty slow year as far as Mortal Kombat was concerned, as there wasn’t a major release planned for that year. For a month or two after the event, things went about as slow as one might imagine during the downtime between releases.

A couple of months after the event, I was at work when I got a call from my father. He told me that something had arrived via FedEx from a company that I knew Midway did marketing work with. I certainly wasn’t expecting anything from Midway, and was even more confused when Dad said that it was something very heavy. So, that evening, when I got home, the first thing I did was get the FedEx box from where Dad had put it. He was right; it WAS very heavy. Even more confused, I opened the box, and was shocked to see what was inside. 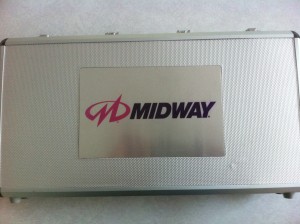 Yes, that is a poker chip set box with the Midway logo embossed on it.

After I got over my shock, I went ahead and opened the box. The chip set was of casino quality. In addition, the chips and cards were labeled with the logos of games shown at the Gamers’ Day event. The cards had the logo of John Woo’s Stranglehold on it, while the chips had the logos for The Wheelman, Mortal Kombat: Armageddon, Hour of Victory, Blacksite: Area 51, and John Woo’s Stranglehold. Whatever Midway paid for these, it could not have been cheap. 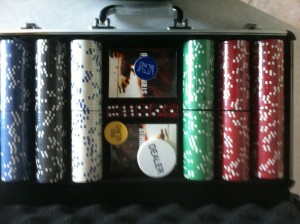 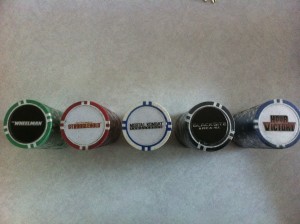 The chip set came with a form letter that thanked me for coming to Gamers’ Day, and stating how much they hoped I would help get the word out about the games announced and shown. Once I looked it over, I put everything back in the shipping box, and put it in a safe place. I’ve only rarely taken it out of its storage place since then, and it has not (and will not) be unwrapped for use. This is definitely a collector’s item.

The thing is, though, that this is an example of bad decisions that I think helped sink the company. I mean, hell, I appreciate that they sent me this item and I wasn’t about to send it back, but still… this was a LOT of money for Midway to spend, and at the time Midway was really starting to hurt. In my opinion, they needed to put this kind of effort far more into their game design process. They already had a policy of “you ship on this date, no exceptions”, which led to unfinished games being released. That of course led to games that should have done well in stores getting panned. Mortal Kombat: Armageddon was easily the weakest of that generation of Mortal Kombat games, and Hour of Victory (which I thought looked horribly derivative at Gamers’ Day) was released irreparably broken. In the end, Midway went bankrupt and the Mortal Kombat assets were purchased by Warner Bros.

These days marketing for games like Mortal Kombat seems to be done smarter. Warner Bros. has more money to spend than Midway did, but they’re putting it to much better and efficient use. To my knowledge, freebies like the books and the poker chip set are out. While I will miss stuff like that… it’s good to know the focus is back where it should be: the games.