… so, the two have had their first vet appointment today. They’re in very good health and have gotten some of their needed shots. The vet also confirmed what we suspected: the mostly-white one (referred to as a “blue point” in coloring) is a boy, and the brown and white one (referred to as a “seal point” in coloring) is a girl.

So, along with another picture of them, I’m pleased to let you know their names. :-) 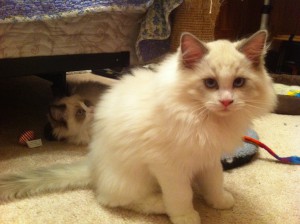 Right now we’re in the slow process of getting them and the older cats used to one another. We’ve opened the spare bedroom door, but put a gate in the entrance to prevent cats from entering or leaving. Sophie and Darcy have already seen Bennett and Sasha; as we expected, Darcy welcomed them with open arms but Sophie is hissing and growling (like the prima donna she is). We’ll keep them separated for a while until they learn to tolerate one another’s presence, and then we’ll let the younger two roam the house freely. As it stands, for the near future all they’ll have access to is the spare bedroom and a short hallway.

They’re definitely getting better about being around us, though, and it’s great to see them playing and discovering their world. This should be a lot of fun. :-)