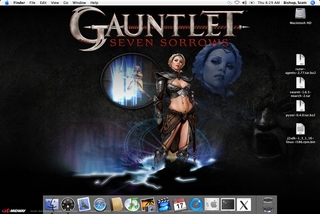 It’s kind of weird. I’ve never been much of a coffee person. Give me a choice between coffee and Diet Coke, and I’ll usually take the Diet Coke. However, for the past week or two, the Coke machine outside my office has been bare of Diet Coke. For that matter, it’s bare of Coke too now. The only remaining choices if I want caffeine are C2 (which last time I got one out of there a couple of months back had already expired) and Mr. Pibb (and I HATE Dr. Pepper-like colas). Well, yesterday, in a bit of desperation for caffeine, I got some coffee out of the coffee pot upstairs and put the French vanilla cream they had available in.

It was actually pretty damn good. I have no idea why.

So, I guess I’m switching to coffee from Diet Coke here. Don’t ask me what prompted me to start liking coffee… I couldn’t tell you. Maybe I’m turning more and more into a professional geek by going for a “professional” drink like coffee instead of sodas like Mountain Dew and Diet Coke. Oh, well.

Then again, lest people think I’ve completely turned away from the geek side… my coffee mug is a black mug with the following immortal words written on it in a classic video game font: “ALL YOUR BASE ARE BELONG TO US.” :-)

I’ve been pretty busy on the computer front too… I’ve been meaning to make a post detailing the pitfalls that went into moving MK Online from its old server to its new one, but haven’t had the time or inclination to do so yet. Last night was also spent in rebuilding my test server, Mileena, with parts taken from the main server, Tyrande. The plan was to rebuild the server and then install CentOS 4 onto it. It ALMOST went all right, except for two major problems. The first was that I somehow managed to put the ATX power connector for the motherboard in upside down. (I STILL don’t know how I managed to avoid frying the motherboard.) The other was that the system didn’t support the 3Com network card I put into it out of the box. Supporting the 3Com card will require me to rework the kernel, which I DON’T want to do. So, I’ll put its old Realtek RTL8139 card back in. Of course, I’ll mess with all that stuff tonight… bleh.

I also found out today that I’m going to be sent out to Edmonton next month to FINALLY do the server switchover I had been expecting to do for the past several months. I just wish I could have gone during summer, when I wouldn’t have to worry about ice and snow on the roadways. Oh, well… I don’t really mind either way. I just won’t be able to go visit the West Edmonton Mall and give their casino a try. :-)

Anyway, I need to get a bit of work done here… I’ll be back later, maybe with the MK Online conversion story for those geeks who care to read it. :-)