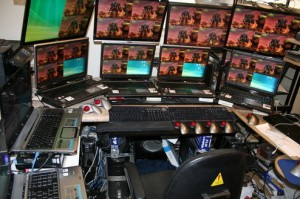 When you can’t convince 35 other people of your master plan to attack two Alliance capital cities, you really only have one alternative: Do it yourself. “Bradster” does. He owns that rig above — 11 computers that run 36 World of WarCraft account simultaneously. His infrastructure costs (to say nothing of his utility bill) weren’t itemized, but he unashamedly admits he pays $5,711 per year in subscription fees to keep together his one-man raiding party (family photo of that on the jump).

The more I look at that pic, the sadder it seems. For example, the majority of machines shown in the pic are laptops. They’re most likely not low-end laptops, either, because each appears to be running a minimum of two instances of World of WarCraft. In addition, the mice are actually medium-to-higher-end trackballs, and not the kind of mice you’d get by default with PCs. Also, not only is the internet bill going to be insane (due to the needed bandwidth for thirty-six concurrent sessions), the electricity bill has to be pretty nuts too. I’m not talking about just the power needed to run those machines. I’m also talking about the power needed for the A/C to keep that room at a bearable temperature. Speaking as someone who’s been in a room full of computers running off of standard A/C, it tends to get pretty hot pretty damn quickly.

Normally I wouldn’t begrudge someone their hobby, but at this cost, this just screams “overkill” to me. I keep thinking that at this amount of money, it’d be much better spent travelling the REAL world instead of getting yourself lost in a virtual world.