All right, I have to admit it. A lot of you probably knew this by now, but I figured I might as well put it out there. 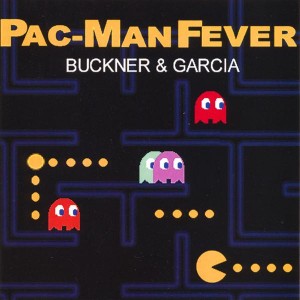 I had the original LP of Pac-Man Fever by Buckner & Garcia.

Back when Pac-Man first hit arcades, I was rather obsessed with the game. I’d play it every chance I got, and I had all sorts of Pac-Man memorabilia. I had a bedspread, I had a book bag, I had a table-top electronic game, and I even had a watch that could play the game. So, of course, when I heard of the album, I just had to get it.

My parents were kind enough to humor me and got me the record. I got to listen to it every chance I got, and being a kid I overlooked the fact that the songs were almost beyond cheesy. I mean, a perfect example is the song “Goin’ Berzerk”, where a beautiful piano solo starting the song is interrupted by sound effects from the game Berzerk, complete with robots saying, “Chicken, fight like a robot!”

Of course, I grew out of the record, and over time I had forgotten I even had it. I moved on to other games, although I would occasionally put Pac-Man on cell phones I owned for nostalgia purposes. I even got Pac-Man Championship Edition for Xbox Live Arcade when it came out. The record itself, though, is still sitting downstairs in my collection.

A day or two ago, something prompted me to remember the album, and I did a bit of looking. Interestingly enough, I found that Buckner & Garcia had released it to CD, and that it was now available on the iTunes Store. I resisted getting it, as I wasn’t sure I wanted to have it in my music library, especially as it might enter rotation on my office music queue. Finally, though, I purchased it as it was only $8.

So, how has it held up, you might ask? Well, it’s as cheesy as it was twenty-five years ago. However, the interesting thing is that this is not the original recording of the album. As near as I can tell (according to Wikipedia), Buckner & Garcia weren’t allowed access to the original master tapes, so they had to re-record all of the songs from scratch. They’re the same songs, but they just sound different. It’s a tad jarring, but I’m sure I’ll get used to it.

Ah, well. I fully admit I submitted to the retro temptation. I wasn’t expecting a classic album. In fact, I knew it was going to be so bad it’s good. I just can wait to see what my coworkers’ reactions will be when/if this album starts playing on my work iTunes queue…

3 thoughts on “Cause I got Pac-Man Fever…”