Well, so far it’s been a relatively calm and fun three-day weekend for me. About the main productive thing I did today was go to Spec’s after getting my hair cut, and picked some snacks and drinks for the party tonight. I picked up some Jose Cuervo strawberry margarita, a bottle of TGI Friday’s strawberry shortcake blender (which Louie introduced me to not too long ago), and a can of wasabi peas. :-) You see, Merrie had a party at her house tonight to celebrate her husband quitting his job, and a few of us came out. It was mainly me, Heather, Lissa, Sean, Jinny, Henry, Brian, and Becky. Mostly we sat around and drank, had snacks, and smoked. (Well, they smoked; Lissa and I didn’t.) All in all, it was a good time. At one point, Jinny broke out the camera and took a picture of most of us in a Godfather/Sopranos moment. 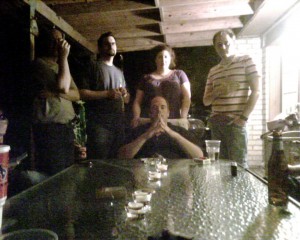 The funny thing is, I almost left with more than I started with. I brought most of the margarita back, not to mention most of the wasabi peas, and the strawberry shortcake blender was untouched. I might have my parents try that tomorrow. I also left with four bottles of Michelob Ultra so as to save room in Merrie’s and Jonathan’s fridge. Fortunately, I had plenty of room in mine.

As for the rest of this weekend, I really have nothing planned… though I admit I’m keeping an eye on Hurricane Gustav, and am not liking what I’m seeing. I’m figuring Houston may at the very least get a glancing blow fron the storm, but if its path keeps moving westward we may very well be in serious trouble. I should know by tomorrow afternoon whether or not I’ll need to make sure both laptops have fully charged batteries and have my spare cell phones charged. I’ve got at least two spare unlocked Motorola V180 phones I can pop my iPhone’s SIM card in if its battery fails. We can’t evacuate, as we have three dogs and two cats to look after. Not to mention I figure evacuation will be a nightmare given what happened when Rita came bearing down on the city.

Ah, well. We’ll see how the storm goes. Otherwise, I’ll just relax and enjoy the weekend, and hope the storm doesn’t decide to give us more than a very glancing blow.

2 thoughts on “After a party, the oncoming storm.”